A few months ago, Andreas presented a nice version of the "throwie" (a LED packed with a small battery that you can throw & see shining for hours) using an ESP8266 instead of a LED : a "wifi throwie".

He could not make it work with button cell batteries (the ESP8266 draws too much current) so he ended using a 3.7 LIPO battery, which is quite bulky as you can see on the following post : http://hackaday.com/2015/05/03/esp8266-wifi-throwies/

What if you could use instead a cheap mini drone battery you can find for half a euro on eBay ?
Bingo !

Introducing the "wifi throwie 2.0", using a micro 100 mah lipo battery recycled from a broken minidrone. According to espressif data (http://bbs.espressif.com/viewtopic.php?t=133), the ESP only burns 15 ma in "Modem sleep mode" - which can last 6 hours with a 100 mah battery. Since the server only send a 5k picture (takes less 30 seconds at 120 mah, ie 1 mah), you can serve ~ 100 connections before the battery dies. The number if even larger if you only want people to see the AP name, but not to really connect.

[Edit] :
-As seen in hackaday !
-I tested the battery with a programm connecting to the internet, sending a tweet and waiting for one minute. It could stay alive 2 hours and a half and send 160 tweets before dying... More than enough for many applications... 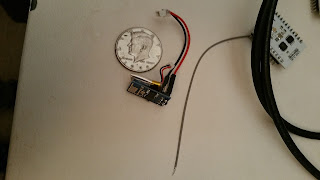 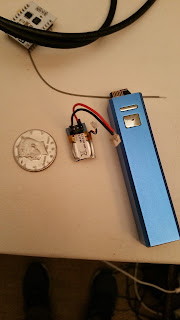 You'll find here a demo : https://www.youtube.com/watch?v=nD_AHmZ63PY
The throwie appears as "ggo iot demo" hotspot. One connected to this hotspot, any url leads you to the captive intraweb showing an "iot demo" picture.

Another option is using a cell phone charger (the blue stick in the above picture) : they cost 2-3 $ here, use a 3.7 V battery and come with a charging module. You can either plug the ESP8266 in it, or glue it on the surface. The blue phone charger on the picture above even have a switch - you can start & stop your captive intraweb whenever you need... 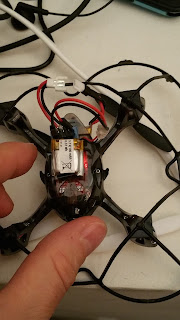 Thanks a lot for Andreas and the communauty for the initial concept !


NB1 : The only side effect of a lipo battery is the fire risk. One way to avoid this is to use the adc.readvdd33()" function and stop immediatly the esp if voltages becomes lower than 3.0 volts and/or plug the battery only for limited time tests.